The United Nations Alliance of Civilizations (UNAOC) is an initiative of the UN Secretary-General which aims to improve understanding and cooperative relations among nations and peoples across cultures and religions, and to help counter the forces that fuel polarization and extremism.

UNAOC was established in 2005, at the initiative of the Governments of Spain and Turkey, under the auspices of the United Nations. In January 2019, H.E. Mr. Miguel Ángel Moratinos assumed the position of High Representative for the United Nations Alliance of Civilizations, succeeding H.E. Mr. Nassir Abdulaziz Al-Nasser, who succeeded H.E. Mr. Jorge Sampaio. The Alliance maintains a global network of partners including states, international and regional organizations, civil society groups, foundations, and the private sector to improve cross-cultural relations between diverse nations and communities.

THE HIGH REPRESENTATIVE FOR THE UNITED NATIONS ALLIANCE OF CIVILIZATIONS 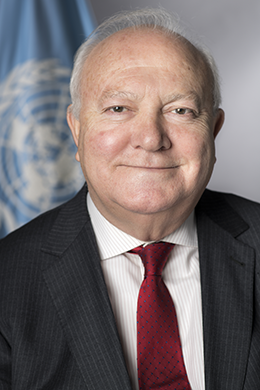 Mr. Moratinos has committed his professional and political career to international relationships and development cooperation, notably as Minister of Foreign Affairs and Cooperation of Spain from 2004 to 2010. During his tenure as Foreign Minister, Spain presided over the UN Security Council in 2004, held the chairmanships-in-office of the Organization for Security and Cooperation in Europe (OSCE), the Council of Europe and the Council of the European Union. Mr. Moratinos succeeded in fostering the implementation of the Treaty of Lisbon and the Treaty on the Functioning of the European Union.

With the Mediterranean in mind, H.E Miguel Ángel Moratinos was appointed Deputy Director General for Northern Africa (1987-1991) and then Director of the Institute of Cooperation with the Arab World (1991-1993). After his tenure at the Institute, he was appointed Director General of Foreign Policy for Africa and the Middle East, holding the position from 1993 to 1996. The highlight of his tenure was the organization of the historic Middle East Peace Conference in Madrid in 1992.

As Spain’s Ambassador in Israel from July to December 1996, Mr. Moratinos succeeded in fostering a strong network with both the Israelis and Palestinians. Building on that success, the European Union appointed him as the EU Special Representative for the Middle East Peace Process from December 1996 to June 2003. During this period, he promoted Peace Agreements and carried out actions on behalf of the EU strengthening the Arab-Israeli dialogue.

As a true believer in the value of multilateralism, Mr. Moratinos helped in the creation and launching of the United Nations Alliance of Civilizations in 2005. He also supported the Group of Friends for UN Reform. Moreover, he contributed to the creation of innovative programmes for development, healthcare and women empowerment within the United Nations system. Mr. Moratinos promoted new projects and funds for water and sanitation in Latin American development countries. During his tenure as Spain’s top diplomat, he doubled Official Development Assistance funds and placed Spain as the sixth donor in the United Nations system.

Following the end of his term in office in 2010, Mr. Moratinos engaged in parliamentary activities until November 2011. During that period, he ran to be elected Director-General of the United Nations Food and Agriculture Organization (FAO) with an agenda aiming at mobilizing international action towards the struggle against hunger and poverty, the promotion of food security and the right to food.

In January 2012, he joined the team of the Global Dry Land Alliance in Qatar promoting this international treaty for food security in more than 15 member-countries in all continents. From 2012 to 2013 he was member of the High-level Advisory panel of the president of the 67th Session of the UN General Assembly.

Prior to his appointment as High-Representative, Mr. Moratinos was the Honorary Chairman of the CIRSD Board of Advisers (Center for International Relations and Sustainable Development), Senior Advisor of Sustainable Development Solutions Network of the Earth Institute at Columbia University and member of the Leadership Council of the UN Sustainable Development Solutions Network (SDSN). In Spain, he also held honorary positions as the President of REDS, the Spanish network for Sustainable development affiliated to SDSN and the President of the Trobades Literàries Mediterràneas Association and the Trobades Albert Camus Award. In recognition for his distinguished achievements, Mr. Moratinos received honorary doctorates from the Universities of Saint-Petersburg, Malta, as well as Ben-Gurion, Al-Quds and Tel Aviv universities.

Born in 1951, Mr. Moratinos graduated in Law and Political Sciences at the University Complutense in Madrid and then in Diplomatic Studies at the Spanish Diplomatic School.

Mr. Moratinos is married to Mrs. Dominque Moratinos and has two daughters and one son.